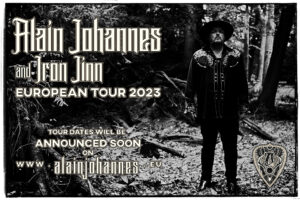 After a well-received and well-attended acoustic tour in 2019, Alain Johannes will return to Europe in september and october of 2023, for an exclusive series of live appearances.
During this two month period, Alain Johannes, who, of course, needs no further introduction, will be performing a limited number of shows, and once again bring you a strong and compelling selection of songs from throughout his career. From his beautiful and captivating acoustic songs from Spark, Fragments & Wholes, his latest release HUM, to his repertoire from Queens Of The Stone Age, his band Eleven, Euphoria Morning songs, Desert Sessions, as well as new material and other gems that contributed to changing the course of musical history.
Alain Johannes live band repertoire is requested by many of his worldwide fans, and this request is now being fulfilled. Alain Johannes performs with full band, to bring his legendary repertoire, where members of Iron Jinn are part of Alain Johannes band.
On this tour Alain Johannes will be supported by Iron Jinn, a brand new supergroup based out of Amsterdam, the Netherlands, consisting of Oeds Beydals (The Devil’s Blood, Death Alley), Wout Kemkens (Shaking Godspeed, De Niemanders), Bob Hogenelst (Birth of Joy) and Gerben Bielderman (Pauw), weathered musicians who have already more than left their marks on the music scene. Iron Jinn’s debut album is set for release in April of 2023, on the renowned Stickman Records label. A first song, entitled ’Soft Healers’ has already been shared with the world, and can be experienced through various streaming platforms.
For booking and more information, please visit www.alainjohannes.eu
For info and up-to-date tour schedule, check www.alainjohannes.eu
Cart
Go to Top