The Djinn by Dr. No and Alain Johannes. 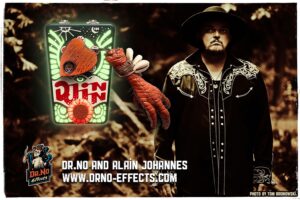 The Djinn by Dr. No and Alain Johannes, Sorcière part deux.

After the appearance of the first effect, the Necrofuzzicon, from the trilogy series called Sorcière by Dr. No, The Djinn now appears, after a long intensive collaboration with Alain Johannes.

The Djinn is the second effect in the trilogy project named Sorcière, Dr. No has been working on for almost 4 years now.

Last year Dr. No was asked by Alain Johannes to build a circuit to build in a new bass guitar, handmade by the Tuscan Luthier Tom Pugi with his company called T.P. Customs stationed in London.  The first and only version of the Djinn by Dr. No recently, was only and exclusively present in a build of Alain Johannes’ Bass Guitar, by Tom Pugi of T.P. Customs London. From here, Alain and Dr. No decided to also release the Djinn in a guitar effect model and make it available to a wider audience.

The assignment was somewhat abstract, but because Alain Johannes has become a good friend of Dr. No, few words were needed to envision and realize what he asked.

Still, it took some time because the question was based on a simple circuit from Dr. No’s previous Laboratory prototypes, but Dr. No wanted to take this prototype to the next level.  Because without that extra mile, it wouldn’t deserve a place in the current Dr. No Effects Collection and certainly wouldn’t be worthy for tone connaisseur and wizard musician Alain Johannes. So the journey started.

“Like a Genie from the bottle”, the Djinn finally appeared.

The name Djinn was formed because this has become a very special circuit; in part on purpose but also accidentally, the Djinn brought much more than intended.

The Occult design and function of the Djinn.

Alain Johannes Spirit Animals the Owl and Turtle integrated into the Djinn.

-The owl is the sacred symbol of wisdom, for the owl was the constant companion of Athena, goddess of wisdom.  The owl sees what others do not and is therefore seen as wise in the occult.

-The Turtle. A magnificent gift from Turtle meaning is longevity.  Turtles live a very long and fruitful life, and teaches great spiritual significance of taking the very best care of self and having a long life filled with splendid journeys having learned many valuable life lessons.  Both Owl and Turtle  elements present are literally and figuratively highlighted in the Djinn.  Both elements on the Djinn glow in the dark.

-The Djinn.  Djinn  possess supernatural powers and can be conjured in magical rites to perform various tasks and services.  A Djinn appears as a wish-granting “genius” in many Arabic folktales.

-The bone, horn element of the Djinn, surrounding the foot switch, lights up when summoning and activating the Djinn.

The Djinn is best described as an effect that brings out properties from each and every instrument that comes into contact with the Djinn. Hidden treasures surface, tone becomes much clearer, instruments become more dynamic, and formerly unknown features are brought out of your guitar, amp or other effects that the Djinn dominates.

Unfortunately, we have to report that the Djinn is a promised indispensable effect in every loop of instruments and you will probably never want to put this genie back in his bottle.

The Djinn works both at the beginning of your effects chain and at the end of it. The Djinn does not colour the character of your signal, it does however accentuate and bring out the properties of your instruments and effects. At a higher gain setting, the Djinn generates an extremely pleasant natural clipping, but does not color the natural signal.

The second part of Sorcière, the Djinn, is a must have for expanding and discovering your playing and instruments more, which will certainly add lots of voodoo to your sound.

The Djinn by Dr. No and Alain Johannes will be limited and exclusively available in the series of Sorcière at www.DrNo-Effects.com. The Djinns are fully handcrafted by Dr. No, one by one, and will be numbered and signed………in blood.

The Djinn uses 9v regular powersupply, and has a built in noise filter.

Release of the first series in October 2021 at www.DrNo-Effects.com and www.AlainJohannes.eu

If you don’t want to miss out on the first release, subscribe to the newsletter at www.DrNo-Effects.com. The limited edition of the Djinn will be built by hand, in very small series each time. In total only 350 will be handmade.

The next Sorcière project is called the “DIVOCAI” (Possessed by an Evil Spirit). Still work in progress. Subscribe to the newsletter to get updates on Sorcière’s Necrofuzzicon, Djinn and DIVOCAI, to collect them all, as well as  other Dr. No Effects, news, and available Dr. No Effects handcrafted work.

The Djinn by Dr. No and Alain Johannes.

The Djinn by Dr. No and Alain Johannes, Sorcière part deux.

After the appearance of the first effect, the Necrofuzzicon, from the trilogy series called Sorcière by Dr. No, The Djinn now appears, after a long intensive collaboration with Alain Johannes. Read more about the DJINN below.